During the winter (if you can call the weather we’re having in Texas winter….), people may have the opportunity to see boxelder bugs emerge out of their overwintering sites on warm, sunny days.  As they can show up all of a sudden in somewhat large numbers, it can be startling. 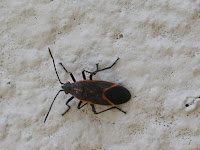 Boxelder bugs are dark brownish-black insects with reddish-orange markings around the edges of the thorax and wings.  The bugs are about 1/2 an inch long as an adult.  Nymphs, or immatures, look similar to adults but are smaller and lack fully developed wings.  Since the wings are not fully developed on immature stages, the red abdomen shows through. 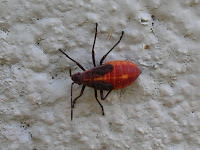 While boxelder bugs typically do not cause damage to the landscape or structure, they may become a nuisance in and around homes from fall until spring.  In the fall, adults and nymphs may gather in large numbers to move to overwintering areas.  Boxelder bugs spend the winter in cracks and crevices in walls, around door and window casings, tree holes and in debris on the ground.  Sometimes they will try to move indoors to overwinter.  On warm days from fall until spring, boxelder bugs emerge from their overwintering location to warm themselves in the sun.

Boxelder bugs feed primarily on the seed pods of female boxelder trees, but occasionally feed on other trees such as plum, cherry, apple, ash and maple.  The insects pierce plant tissue with their mouthparts and suck juice from the plant.  Even though the insects feed on plant juices, they usually do not cause damage to the tree.

Removing female boxelder trees from the area may solve problems with large, repeated infestation of boxelder bugs.  Hiding places can also be reduced or eliminated by removing debris such as boards, leaves and rocks from the area as well as sealing cracks and crevices around the home with sealant.  If chemical treatment is desired, treat overwintering areas with chemicals containing active ingredients such as pyrethrins, cyfluthrin, bifenthrin, carbaryl or acephate.