Over the past week I’ve been getting questions on large wasps that people are seeing emerging from the ground.  They want to know what they are and be reassured that they are not the Asian giant hornet.  These wasps are known as cicada killers and are aptly named.  Cicada killers are large wasps, reaching around 1.5 inches.  They have a rusty colored head and thorax with a black and yellow patterned abdomen.  The wings are also rusty in color, but transparent. 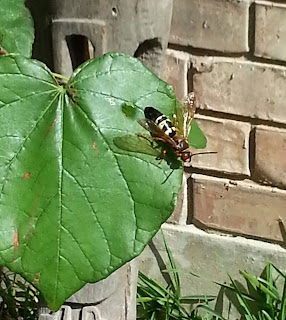 Cicada killer wasps are solitary, but multiple wasps may be seen in the same area at times.  Males are known for aggressively defending their territory and patrolling burrows created underground. While males dive bomb someone who walks into their territory, they are incapable of stinging.  Female cicada killers are capable of stinging, but generally reserve their stinger for paralyzing prey and tend to only sting in defense.

Adult wasps feed on nectar and tree sap while immatures feed on cicadas.  Adult female wasps locate a cicada, sting it causing the cicada to become paralyzed and then carry it back to the tunnel created in the ground.  She drags the cicada into the tunnel and to a nesting chamber.  Each chamber is provisioned with 1-2 cicadas before the female lays an egg on the leg of the cicada and seals up the chamber.  Once the egg hatches, the wasp larva eats the provided cicadas, overwintering in the ground as a mature larva, and pupating the following year to emerge again when cicadas are available.

Tunnels are about a foot deep and about 2 feet long with 3-4 chambers off to the sides for provision cicadas for larvae.

These wasps are considered to be beneficial, so no control is recommended.  If you feel that you need to manage them, you can:

1. Use clear plastic tarp over the tunnel area to solarize

2. Sprinkle and insecticidal dust around the tunnel opening and tamp it down with your foot